Lisa Nakamura begins the third chapter of Digitizing Race by discussing the ubiquity of the interface as a feature in popular film, spanning the genres of science fiction and thriller to romantic comedy. Movie scenes in which the interface figures prominently are worth paying attention to in that they “allow insight into both the characters that use them and the ways in which information, surveillance, and visualization function in the realm of the film and in society at large” (95). As “mastery” of the interface can be understood in terms of “immediacy,” or a direct and transparent relationship with technology, Nakamura is interested in analyzing instances in which certain bodies are filmed as not having an immediate relationship to interfaces (95). Focusing primarily the “racio-visual logic of race” in The Matrix trilogy and Minority Report, Nakamura argues that representations of interface use “sets up distinct roles for particular races, and distinct ways of conceptualizing the racialized body as informational property for use in dataveillant state apparatuses” (97). In these two films, white users engage in direct, visual, and unmediated relationships with the interface; black users are depicted as “witnesses and support staff” (97).

Nakamura thus distinguishes between “‘black’ and ‘white’ interface culture” (99). In The Matrix, for example, white users engage with interfaces by means of gesture; that is, they interact with technology without forms of mediating technology (99).

Black users, in contrast, cannot access the interface without the use of mediated—and arguably antiquated—technology, such as a keyboard, computer mouse, or headset.

While the white user is able to interact with the interface through more transparent means, the interface itself is figured as white; it is clear, fluid, and visually transparent. White characters—and interfaces—in each film are linked with oppressive forms of control (surveillance, dataveillance, etc.). The presence of the white interface thus suggests the “paradox” of whiteness as the “paradox of new media” (98). Nakamura suggests that computer use “is also a privileged site for looking at the ways that black and white identities are constructed in relation to new media in this trilogy” (98). Whiteness is dangerous in terms of its “ability to reproduce itself infinitely” (101). The black user is present in The Matrix trilogy in opposition to the whiteness of the interface, particularly in relation to a perceived level of ‘coolness’ maintained by the black user. While white male characters, representative of “machine culture,” are infinitely reproduced, the black characters remain essentially stable, and more human (100). Nakamura writes:

This is how the films portray their strong critique of information society, post-Internet, as well as how they pose their solution to this problem—while machine culture is viral, oppressive, and assimilative, Afro-futurist mojo and black identity are generally depicted as singular, ‘natural,’ and, as Ebert puts it, unassimilable and ‘authentic.’ Blackness retains its identity in the face of technological change, white power and privilege, and racism. (100)

Ultimately, the black interface user—with “Afro-futurist mojo,” or ‘coolness’—is depicted as an alternative to the unnatural power and control inherent in the white interface user (and the interface itself) (100). Nakamura thus posits that blackness is “represented as a source of human agency in this techno-future” (103). Through the inclusion of a black characters in relation to a predominantly white interface, The Matrix trilogy “creates a counterdiscourse to cyberutopianism, one that comes at an especially opportune time as we exit the millennium with the knowledge that the Internet has failed to live up to its much hyped potential to liberate users from their bodies, from racism, and from inequalities of all kinds” (104). However, this ultimately problematizes race in terms of ownership and property: who, in other words, has the ‘right’ to present raced bodies in this way?

II. The Transparent Interface and “the presence of the black figure” (107)

Nakamura next considers the interface and its racial implications in terms of another film, Minority Report. Here, the “metaphor of transparency” is made literal in relation to interface as depicted in the film; it is visually transparent and clear (the viewer of the film sees through the interface itself as Tom Cruise’s character, John Anderton, manipulates the screen via gesture) (106). The presence of black interface users—occupying a largely secondary space only through the use of mediating technology—serves to emphasize the interface’s whiteness. Nakamura writes:

The presence of blackness in the visual field guards whites from the irresistible seduction of the perfectly transparent interface. The implication here is that black and white interface styles can coexist, with blackness legitimating the white device as a means for producing pleasure and displacing anxieties regarding the hegemonies of white interfaces. In other words, the “mojo” of blackness in the computer interface is a salable commodity in the world outside the films as well. However, the price paid is that blacks are never depicted as masters of the interface, never creators of digital images, and are never depicted manipulating the interface in this direct bodily way (109).

Ultimately, blackness in each film functions as a commodity in that the presence of black users prevent white users from becoming wholly engaged in the damaging nature of the transparent interface. Rather, the white user is somehow reminded of what exists beyond the transparency of the interface. However, as both films demonstrate: the black user does not get to possess a privileged relationship with the interface. In this way, the black body benefits only the white body and is not given the same level of subjectivity.

III. The Interface & the iPod

The transparent interface—represented as “intuitive, universal, pre- or postverbal, white, translucent, and neutral”—is made apparent in the aesthetic interface/object design of the Apple iPod. Nakamura discusses iPod advertisements in relation to their representation of whiteness/blackness; specifically, she considers the 2004 advertising campaign that depicts black (as in colorless) silhouetted bodies dancing with white iPods against colorful backgrounds. 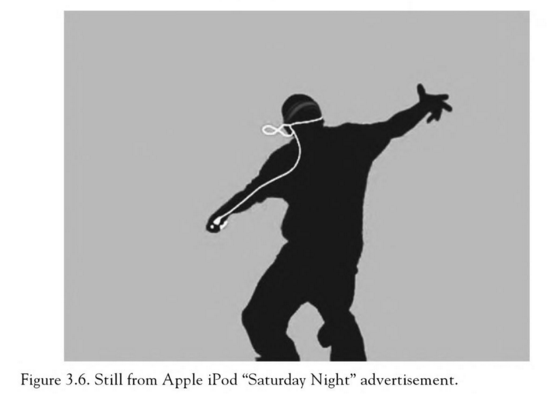 In this advertisement campaign, the bodies using the iPods are depicted as “black void[s] into which a viewer’s identity can be transported” (109). As a technological object, the iPod is so appealing for potential consumers insofar as the consumer can place their mark on an otherwise uniform interface—or, in other words, a consumer can place their own music and/or playlists into the interface and customize the tracks that are available at any given time. While each iPod looks the same, the devices are “object[s] of desire” because “they are meant to be written on, to be shared with others, to contain subjectivity in a way that clothes or furniture cannot” (110). In this way, the iPod is enmeshed with “digital privilege;” the user can engage freely with media if they know where to look (111).

Nakamura discusses the media form in terms of “flatness;” however, this is “counterbalanced by the creation of extremely well-differentiated visual styles that trace out different options in terms of race and ethnicity” (111). Nakamura draws a comparison between the iPod commercials—in which the silhouetted bodies are depicted as dancing to different genres of music—to Jennifer Lopez’s “If You Had My Love” music video (111). Where the viewers of the video were given the option to click through different identities—each of which have different racial associations and implications—the potential consumer can ‘select’ a different music identity.

Part of why this campaign is so successful depends on Apple’s apparent mastery of marketing their products in terms of what is “cool” (113). They accomplish this in part by “promoting an Afro-futuristic visual culture” in order to “separate blackness from other types of identities (the punk rock iPod ad features a thin white woman dancing pogo-style to aggressive sounding music) while presenting it as a stable object that can be enjoyed as one of a range of visual and musical options” (113). The music that users can select for their iPods are, however, not random; they “produce predictable configurations of bodies, types, and images” (113).

This leads the way to critiques of the iPod, most notably the “iPod Ghraib” series by Trek Kelly. 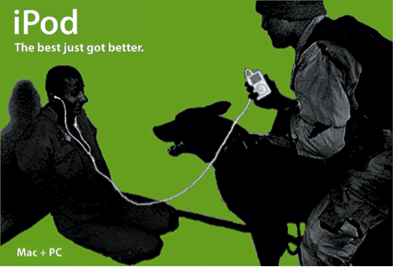 Here, the bodies are not completed blacked out; it is clear that “not just anyone can occupy that desired space of musical free volition, expression, and consumption” (115). Kelly’s critique bears similarities to The Matrix trilogy and Minority Report in terms of marginal blackness. According to Nakamura,

Whiteness is replication, blackness is singularity, but never for the black subject, always for the white subject. How best to read the particular position of the marginal black in cinematic depictions of the interface? Marginal blacks are literally in the margins of these images—witness to the digital image production that threatens to smudge the line between reality and virtuality. And for many critics, the contrast between the real and the virtual is the most important issue to consider in the films. (116)

Nakamura suggests that race functions “as a way to visualize new media image production” (116). In other words, one must consider the color of the people creating images with interfaces and the color of those who will be “taking care of the bodies” of those who will be more connected (117). In specific relation to Minority Report, Nakamura suggests that the film depicts the negative potential of racial profiling in a digital culture that prizes the white, connected body over the black and ‘marginal’ one.

Nakamura, Lisa. “The Social Optics of Race and Networked Interfaces in The Matrix Trilogy and Minority Report.” Digitizing Race: Visual Cultures of the Internet. University of Minnesota Press: Minneapolis, 2008. 95-130. Print.