The meme—in its numerous iterations—points to the ability of information to replicate and mutate across the Internet. Such information can spread towards a variety of ends, be they political, informative, harmful, or simply humorous. Memes point out the extent to which ideas have the potential to spread across wide audiences and be subjected to subtle change as they are encountered by even more groups of readers/viewers. So, how does this work?

In his essay, “What Defines a Meme?,” James Gleick surveys the idea of the meme as embodied information, in the sense that information can be considered to be as “real” as the brain circuitry that they move through (Gleick). Such an idea comes from neurophysiologist Roger Sperry, who further argues:

Ideas cause ideas and help evolve new ideas. They interact with each other and with other mental forces in the same brain, in neighboring brains, and thanks to global communication, in far distant, foreign brains. And they also interact with the external surroundings to produce in toto a burstwise advance in evolution that is far beyond anything to hit the evolutionary scene yet. (Gleick)

This is to say that ideas can interact and communicate, jumping from brain to brain and from context to context. Ideas compete for our attention and for staying power within the realm of our consciousness. Memes are successful when they stick around (and become subjected to further mutations and recreations). According to Gleick, memes “emerge in brains and travel outward, establishing beachheads on paper and celluloid and silicon and anywhere else information can go. They are not to be thought of as elementary particles but as organisms” (Gleick). That is, memes develop lives of their own, transferred through either ideas, tunes, catchphrases, images–or, what is most likely, some combination of each (Gleick). They are always, however, born out of a particular idea that is then capable of spreading.

Once memes have been created and spread, Gleick notes that they “have effects on the wide world beyond themselves” (Gleick). Memes can simply encourage beneficial practices (i.e. washing one’s hands before cooking), or they can be incredibly harmful (i.e. suicide bombers’ belief that they will be rewarded for their actions) (Gleick). However, memes can exist somewhere in the middle–neither beneficial nor harmful–but simply funny.

For example, here’s an actual portion of the tapestry:

The meme itself is a variety of parodies of the tapestry, changing the wording to appeal to a variety of senses of humor. For example, there are a string of bayeux tapestry memes that are meant to appeal specifically to the Star Wars fandom. Others relate to Doctor Who:

Here’s another example of the meme: 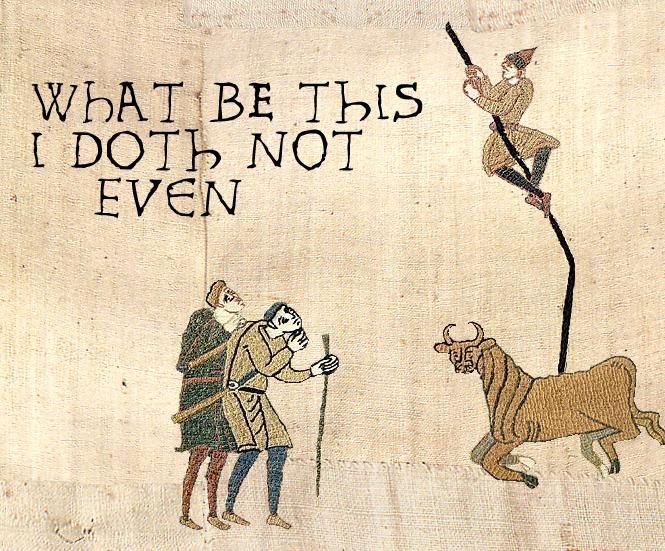 Here, the wording is arguably itself a meme–“I can’t even”–as it related to what is an apparently absurd situation. A man is on a stick (growing out of an ox?) while two other men look on. The humor works because it’s making fun of what is a serious document of British history by applying easily relatable text to the image. It draws upon the ridiculousness that scholars of the tapestry have to (in theory) take with a straight face and look at in terms of its historical significance. The meme encourages the audience to look this absurdity in the face, and the result is a type of humor that–I think–can have a pretty wide appeal.

I think this meme also helps to demonstrate the extent to which community can form around the meme, and memes appealing to specific audiences can develop. For example, someone who is not a fan of Doctor Who (or at least not familiar with the show) will not understand the implication of the Tardis in the above meme, but they might find the “I doth not even” meme funny. If nothing else, this shows the extent to which memes can develop in audience specific (as well as audience-general) ways.

And, of course, they are a lot of fun! 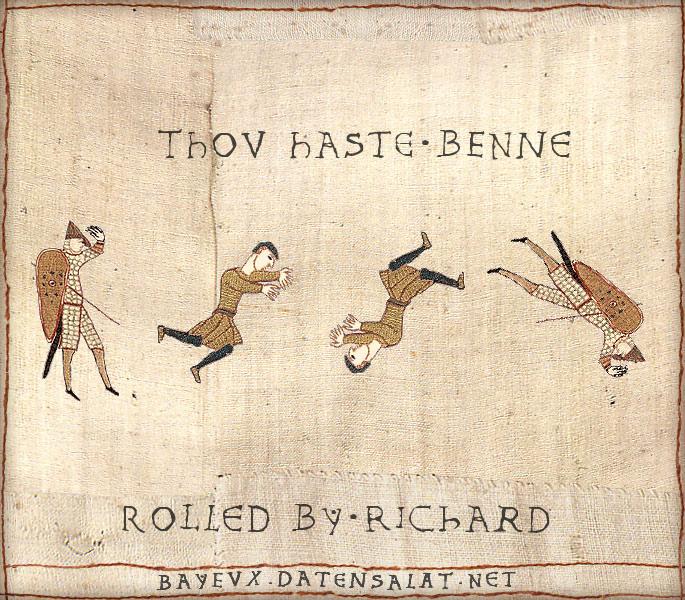 James Gleick, “What Defines a Meme?”

One thought on “What Be This I Doth Not Even (or, a blog post about memes)”